skip to main | skip to sidebar

Here is Antonio Cook, Building manager of 182 Graham Ave, denying his job and identity after dragging his feet on getting the gas turned back on in 2018.

Posted by Captain Zorikh at 3:22 AM No comments:

Here we see a series of days following the Nov 2 "interview with Antonio Cook. We also start to deal with the gas, which has been turned off for over a month...

Posted by Captain Zorikh at 12:58 PM No comments:

This video was shot just one day after the October 11 Walk-though, and it catches evidence of work in the morning, some in the evening, and someone in the act of working!

Posted by Captain Zorikh at 12:07 PM No comments:

Here is a walk-through of 182 Graham Ave on October 31, 2018, showing more evidence of un-permitted renovations being done by buuilding manager Antonio Cook.

Posted by Captain Zorikh at 4:04 AM No comments:

Posted by Captain Zorikh at 1:56 AM No comments:

Here is the first video I shot of Antonio Cook of Urban Properties, building manager of 182 Graham Ave., back on November 2, 2018.
Posted by Captain Zorikh at 1:35 PM No comments:

About that little incident... 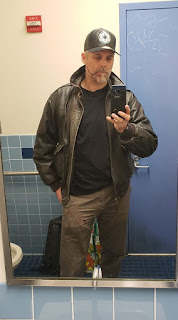 Hi Friends. I want to thank everyone who has liked, loved, saddened, hated, laughed, wowed, and/or posted at the pictures and links to the news reports about the little incident that happened on Friday night. I never believed that there were so many people who would react to something I did, nor that this would become such a media sensation! Wow indeed!

I am still processing the event and how I feel about what went down, the many reactions to it, and the media coverage that it has engendered. On the one hand, it is the one single thing that I have done in my life that has gotten me this level of attention. On the other hand, what am I supposed to do with the rest of my life? How can I best serve the import and impact of this moment and not cheapen it, ruin it, or waste it?

While I ponder that, I want to cover just a few bases... 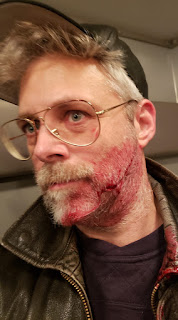 My actions were not a call for other people to imitate my actions. There are perfectly good reasons for people to do things other than what I did, and surely must be better outcomes in some of them.

In fact, if everyone responded the same way to all stimuli, the entire human race would die at the same time. We need people to prioritize different things so that we have a balanced society.

The press gets a few details wrong in every report, but so far none of them have been so huge that I can't live with them...at least for a few more days, and then I may just do a "press correction roundup" or something.

There are people out there who take greater risks than I did every day: military personnel, police, firefighters, EMTs, astronauts in space, everyday people just walking around in northern Syria. Not all of them chose to be there, not all of them are heroes, but they all face risks beyond that of the average person. In the face of that, I think it is easy to overstate my "heroism" when compared to what some of these people go through. 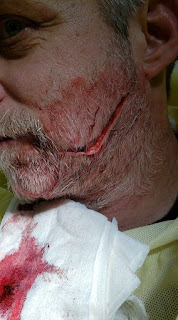 The biggest takeaway I want people to have from this is that if you find something you want to do as badly as I wanted that guy to stop shoving that other guy, that you are willing to put yourself in that risk, stop messing around get to it!

The second biggest takeaway I want people to have is to not put themselves in places where they have to take that risk when it really is not that important. There are times when you can, and should, just walk away. A 20-minue delay in getting home is worth is when it means you can avoid getting your face slashed (and spending the rest of the night at a hospital talking to cops and medical personnel).

Finally, when getting on the subway, please move away from the doors. Move inside towards the center of the car. You are only slowing things up for other people when they have to squeeze between you and the other person in the doorway to get in and out. You may be getting off at the next stop, but I am getting on the train now. And if you would just take a step to your right, turn around, and grab that pole, then the next person could take your place, someone else take their's, and now one more person can get on the train.

Then, when a crazy person wants to get in a fight, they will have one fewer things to fight over.
Posted by Captain Zorikh at 4:59 PM No comments:

Captain Zorikh
Multi-talented entertainer, writer, filmmaker, artist, historian, grappler, swordfighter. I am writing a book about the many Captain Marvels, and compete in swordfighting and submission grappling. I make movies, act, sing, and do stage combat, and critique on all media.